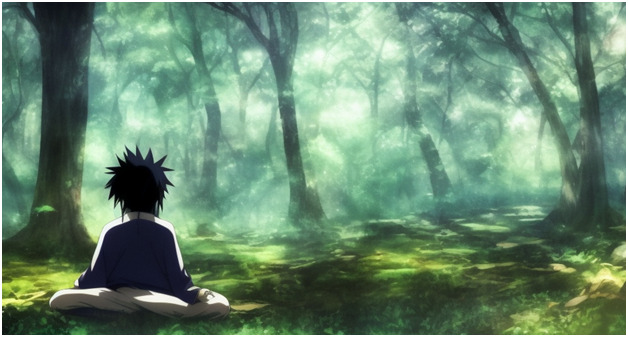 Sasuke is one of the most iconic characters from Naruto — and all of anime. He has a bold personality and exceptional ninja skills and a dark storyline. Sasuke is smart, ambitious, and stubborn. He uses fire and lightning chakra elements to drain energy from his opponents. You can’t just grab a Sasuke sword and cosplay him.

First you need to understand Sasuke a bit more! Here are some of the best Sasuke moments to help you cosplay this layered character at the next convention.

Sasuke had a life goal around this time to seek revenge on someone, killing them. But he gives up on this goal to protect Naruto against Haku’s Crystal Mirror attacks. He ends up sacrificing himself to save him, showing a more empathetic and caring side that’s often hidden.

During the Chunin Exams, Sasuke had to fight Gaara, who was confused and after blood. To defeat this disoriented and chaotic opponent, Sasuke copied Rock Lee’s hand-to-hand combat style. He had to learn this within a month, proving his skill.

Sasuke has fought basically everyone at this point. He has fought Naruto multiple times, in fact .But the second time he faces him is one of the most iconic. Naruto tries to bring Sasuke back home from the Valley of the End but finds himself wanting revenge.

Crying on the Beach

Sasuke’s backstory is a horrific one. He returns to his village to find that Itachi has killed his family and the rest of the clan. After that, Sasuke wanted to train to get revenge on his brother and avenge his loved ones. Due to this complex story, there are many emotional moments that pull on fans’ heartstrings. One of those is when Sasuke cries on the beach after learning the truth about Itachi and why he did what he did.

Sasuke fought his brother, Itachi, later on. It was one of the most highly anticipated fights in all of Naruto. The intense fight had both sides giving it their all, creating one of the most intense battles in the entire anime. At one point, Itachi almost kills Sasuke but then willingly ends the battle by touching Sasuke’s forehead. Itachi collapses and dies, leaving Sasuke stunned and horrified. Popular consensus is that Itachi went easy on Sasuke because he loved him so much, ultimately sacrificing himself.

This battle didn’t go as planned. Sasuke and his group Taka underestimated his power and many were badly wounded. It’s an intense and scary moment in the anime. Viewers were left on the edge of their seats when they realized Sasuke was tricked.

More fights! Sasuke invaded the five Kaga summits while looking for Danzo. Leading up to the confrontation, Sasuke kills a ton of guards and fights two Kages. Throughout the violent journey, Sasuke shows no remorse or emotion. He’s clearly on a mission and can’t be stopped.

The anime fandom was stunned when Sasuke let out some of the evilest laughter they ever heard. After killing Danzo in an earlier scene, Sasuke lets out this sinister laugh in front of Kakashi and Sakura. He was clearly overwhelmed by the earlier fight, since he felt Danzo was responsible for Itachi’s fate.

The anime community will never forget when Sasuke decided to fight in the Fourth Great Ninja War. He is persuaded to do so after listening to Hashirama talk about the importance of being a shinobi.

Sasuke and Naruto have no shortage of combat throughout the anime. The final fight is one of the most memorable, however, since it shined a light on Sasuke’s emotions at the time. While normally quite stubborn, Sasuke realizes he can’t do everything on his own and has to acknowledge Naruto’s skills. During the battle, Sasuke even loses an arm. He chooses not to get a prosthetic, feeling as though fate is punishment for his prior actions.

Looking to cosplay Sasuke? This scene is a great way to learn more about Sasuke’s personality and behavior. You’ll also want a Sasuke sword and the signature cape he wears when he loses his arm in these later seasons.

Atoning For His Sins

After the war, Sasuke leaves his village to better understand himself and the world. He hopes to atone for the sins he committed, acting as a Shadow Hokage to protect Konoha from anything that attempts to threaten the village. This shows how much Sasuke has grown throughout the anime.